When you think about mascots you may think of a range of different animals and people - maybe from your favourite sports team or brand. You can probably name a handful straight away. From Ben & Jerry’s cow to the Hamilton Ti-Cats Tiger, animals are most frequently chosen to represent brands.

With so many creatures out there to choose from, you don’t have to be Dr. Doolittle to pick one that’ll speak for your organization. Of course, there is a reason that certain mascot animals have been so popular, and it’s related to the attributes the animal represents and how that relates back to the brand.

A light-hearted article by USA Today had a very strong view on the choice of animals for sports mascots: “Sports teams have gotten complacent with their mascots. There are too many “eagles” and “panthers” and “tigers” and enough is enough.” (USA Today, 2016). The post goes on to suggest 50 unusual mascots including: Zebras, Warthogs, Puffins, Llamas, Capybaras, and Blobfish!

We are by no means saying there is anything wrong with the most popular animals, but here are 5 animals we feel have been unjustly overlooked when it comes to mascot selection. 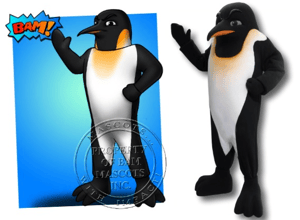 Pittsburg hockey fans might disagree with this, but there really aren’t too many sports penguins out there. While they are a rare bird, we have created penguin mascots for clients. Here is the mascot BAM created for Cushing Academy ready to take the chill off the crowd.

The flightless bird is both charming and family-oriented, friendly and approachable and loyal - they pick a partner for life! So how can an animal with such warm traits be overlooked and rarely used as a mascot? Honestly we don’t know!

Man’s best friend at sea, dolphins are forever seen as an aquatic protector, and are one of the smartest animals on the planet! They are highly social animals who have a group mentality, yet they not commonly seen leading the team as a mascot.

Yes, there a couple of noteworthy examples, such as the mascot for Miami’s NFL team, and the dolphin we created for Splash Down, but statistically speaking, not a large percentage of animal mascots are dolphins, or even aquatic for that matter. 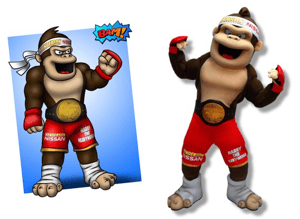 Monkeys and gorillas are often portrayed as antagonists in pop culture, from the barrel throwing ape, to an Empire-Estate-Building-climbing beast, it is clear these gentle playful creatures have been painted as the bad guys.

Gorillas in particular are smart, social and powerful creatures. They are one of our closest animal relatives, however, there aren’t many gorilla mascots in comparison to other scene stealing animals, like cats. 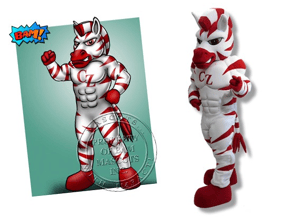 Who can forget this docile member of the horse family, with their distinctive black and white stripes. Unlike their family members, these animals have remained completely wild and have never truly been domesticated.

Zebras rely on tightly knit groups and they need each other to survive and work together to avoid predators. Zebras heavily use communication and are very social creatures, so it’s very bizarre that we don’t see more of these mascots for teams. While their stripes might be a camouflage in the savanna - a zebra mascot will stand out in the crowd on a football field. 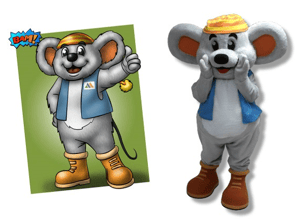 How can anyone forget the loveable antics of that famous dueling cat and mouse duo? Or the popularity around the British spy mouse in the 80s.. Mice have been at the centre of cartoon animation since Disney - but there’s a shortage of College mouse mascots out there.

Besides the aforementioned mouse from California, and his love interest, it is hard to think of too many mice that have been used as mascots. One that comes to mind is the mouse we created for Smuggler’s Notch Resort.

Mice are often portrayed as resourceful, smart and brilliant tacticians, all very positive attributes, yet the mouse is rarely seen as a mascot. A mouse mascot could also be family oriented, and because they are often seen as timid creatures, would appeal to younger audiences.

So there you have it, 5 animals we feel need a higher representation in the mascot world.

Regardless of what animal you want to base your mascot on, we’d love to hear from you and help you create the perfect mascot for your sports team, school or company. If you can imagine it - we can create it!